Oscar is seven years old. When he is not at work he loves to go horse riding in the New Forest (obviously he doesn't ride a horse but runs alongside Emma).

He regularly covers 15 miles in a day but usually about 8 miles so he is very fit. 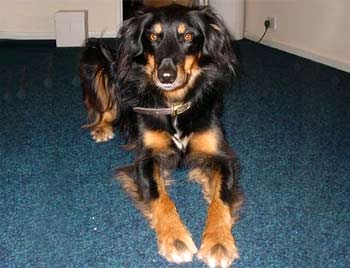 Oscar is a Collie cross something. We're not completely sure but most people seem to think German Shepherd or Alsatian.

Our neighbours at home took in a Collie rescue dog called Polly. She was very thin and in a poor state but she quickly put on weight and then, a few months after she arrived she gave birth to five puppies.

He was named after Oscar Wilde whose name came up during a 'name anyone famous' naming brainstorm.

Here's Oscar at one of our Thursday night croupier training sessions for our Fun Casino team.

His chip handling was finally scuppered by a lack of opposing thumbs!

Oscar is quite a character and will be pleased to meet anyone who comes to visit us.

If you bring a small dog treat you will make a friend for life. Every morning a sandwich van arrives on our Trading Estate and beeps its horn. At this signal Oscar will jump up and bark, asking to go out as he knows that the lady on the van will give him a sausage.

It's a classic 'Pavlov's Dogs' reaction. On one occasion James and Emma were both on the 'phone and looked out to see that Oscar had made his own way out with and was waiting patiently in the queue!