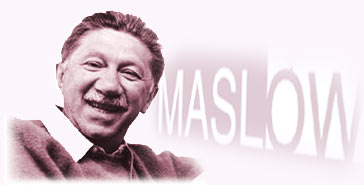 The Hierarchy of Needs

Abraham Maslow (1908 - 1970) was an American psychologist and behavioural scientist who also spent some of his career working in industry.

His book, Motivation and Personality, was published in 1954 and his theory has become an important part of the study of workplace motivation.

Maslow saw human needs as a hierarchy which was represented as a triangle for ease of understanding. The first need, Survival, is placed at the bottom.

Maslow surmised that people could not commit to moving on to the next need until the previous need was fully attained.

Once the needs were attained they would cease to be a motivator, so motivated people would start to look to the next need in order to satisfy themselves.

If a manager can see where an employee is in the hierarchy then they will understand how best to motivate that individual.

Maslow wrote that there are certain conditions which are immediate prerequisites for satisfying needs; such as the freedom to speak, freedom to express or defend oneself, justice, fairness and honesty.

How to motivate people

Maslow's Hierarchy of Needs is a useful tool to consider the nature of motivation.

In Twyla Dell's book How to Motivate People (Kogan Page 1988) she matched ten work linked qualities to Maslow's work to help readers to link the theory to more familiar concepts:

Efficient managers
Employees who think for themselves

Be listened to
Be informed

The Team Building Company can organise team building events based around Maslow's Hierarchy of Needs.

This will be led by a facilitator who is familiar with the model, who can show a team how it works and use it to encourage team building with the group.

In our usual style this will be set around events which are designed to be fun and motivating so that your team really will get the best out of the training.